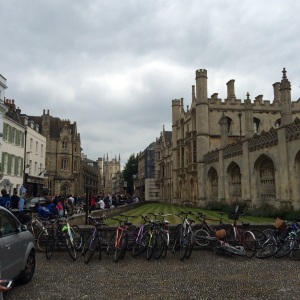 Today, Mary and I worshiped at King’s College Chapel.  It was a glorious service which included a brass ensemble. The full choir of Men and Boys sang.  The Dean of the King’s College delivered the sermon.

This is the 500th anniversary of the completion of the stone work at the chapel.  To commentate this occasion the Dean has been preachng a series of sermons about those who served the college in the past.  Today he told the story of Eric Milner-White who served as Chaplain to the college after WWI. He began the tradition of opening the chapel to the public on Chrsitmas Eve for a  Service of Nine Lessons and Carols.  This tradition contiunes to today and the service is broadcast annually by the BBC.

Milner-White was known for his beautiful prayers.  The Dean used his prayers in his sermon and during the celebration of communion.  This is one of Milner-White’s prayers: “Lastly, let us remember before God all those who rejoice with us, but upon another shore, and in a greater light, that multitude which no man can number, whose hope was in the Word made flesh and with whom in the Lord Jesus we are for ever one.”  As we worshiped with people from all over the world, these words reminded me that we will all gather in adroation around the throne of our Lord Jesus Christ one day, as one body.

At the High Altar there is the painting by Rubens, The Adoration of the Magi (1634).  This painting is a vivid reminder that all people, including royalty, will one day kneel in adoration to Jesus Christ.

Today I was glad I joined my voice in praise with all those present in worship. Adoraton will be the work of heaven.  Every time we praise God, our voices join with those who continually praise the Lord Jesus Christ on another shore and in a greater light.