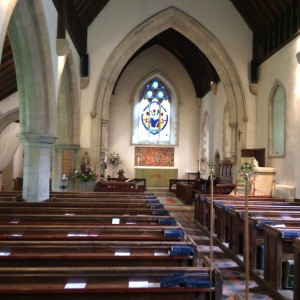 In Sunday’s blog I mis-spoke when I said that C. S. Lewis was a member of St Mary’s Univeristy Church.  He certainly attended the church but his home church was in the village of Headington.

Mary and I attended the 10 a.m. Pram Service.  Pram is the British word for baby carriage.  This service was for babies and preschoolers not yet in school.  The service is designed just for them so that they might understand worship and feel comfort in church,  We sang songs with motions and watched the children run and crawl up and down the aisle. It was delightful to watch the children and join in with them.

At 10:45 a.m. the Verger, Mike Stranks, met us and spent over an hour telling us tales of Lewis and his brother.  We are very grateful for his kindness.  We saw C. S. Lewis, known to his friends as Jack, through the eyes of his church family.  We sat in the pew he sat in.  We gazed through the Narnia Window.  We were taken to his gravesite where he and his brother are buried together.  His wife, Joy was cremated and her remains are in a crematorium in Oxford.

After we left the church, we walked through the neighborhood, crossed a major highway and headed for the Kilns.  This was the place where Lewis made his home.  Unfortunately, we were not able to see the inside.  The house is now used as a residence and tours must be booked in advance.  We called when we arrived at Oxford but there were no dates available.  We walked around the home, respecting the privacy of the new owners.  We also toured the nature reseve next to the home which is the C. S Lewis Nature Reserve.  This is the place where Lewis would walk.  It is a beautiful wooded area with a lake.

Our day ended in the most glorious way.  We attended an Evensong service at Merton College.  This was a choir of women and men made up of Merton students. Their voices were rich and of such high quality.  They sang a lovely setting of Psam 119:1 which says: Happy are those whose way is blameless, who walk in the law of the Lord.