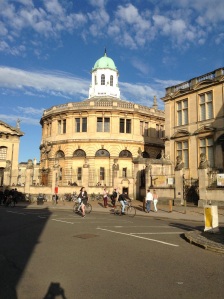 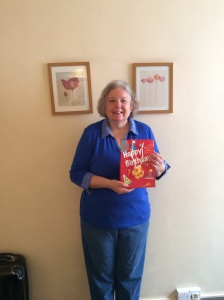 From London to Oxford, England

Today we left London and traveled by train to Oxford.  Our train ride allowed us to see the beautiful English countryside.  We arrived at noon and after checking in to our hotel, we hopped on a tour bus and rode through Oxford.  To see the streets and view the city is like traveling back in time.  It is hard to wrap your mind around the many centuries of history that are represented in this city.  Oxford is known as the city of spires because the sky is lined with many spires from the various colleges that make up the university.

We are in Oxford to trace the steps of the Christian writer, C. S.Lewis.  He was both a student and professor here.  Today, however, we just wanted to get acquainted with city.  During our guided bus tour we noticed a poster advertising a concert at Sheldonian Theatre.  We couldn’t beleive what we were reading.  Vladimir Ashkenazy was conducting the Oxford Philomusica tonight at 7:30 p.m.  I called and amazingly enough, tickets were still available.  We decided we were going.  The concert was a feast for the ears and it couldn’t have been a better birthday gift.

The Sheldonian Theatre is a circular building designed by Christopher Wren.  You may remember that he designed St. Paul’s Cathedral.

In June 1967 the Beatles released the song, When I’m 64.  When I first heard it played, I was 17.  I could not imagine that one day I would reach the age of 64.  Today I celebrated my 64th birthday by enjoying an outstanding concert in Oxford, England. This too is a day I also could have never imagined.   My heart is very  full.

P S Thank you all for the many good birthday wishes.